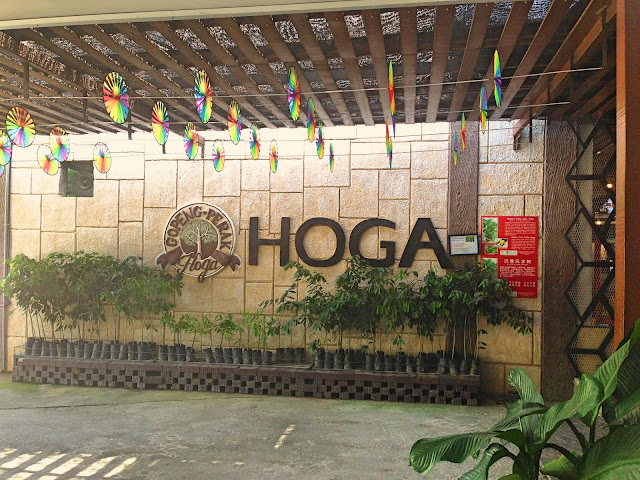 So I said gaharu and gaharu is agarwood. What is HOGA then?

Well, HOGA stands for holistic gaharu. What's so holistic about a bunch of trees? They are the special 12-in-1 super hybrid agarwood tree, claimed to be the superior among its kind.

Visitors can enjoy the offerings at HOGA Deli or shop at the HOGA mart. I decided to delay my main reason for coming here and took the van tour first. 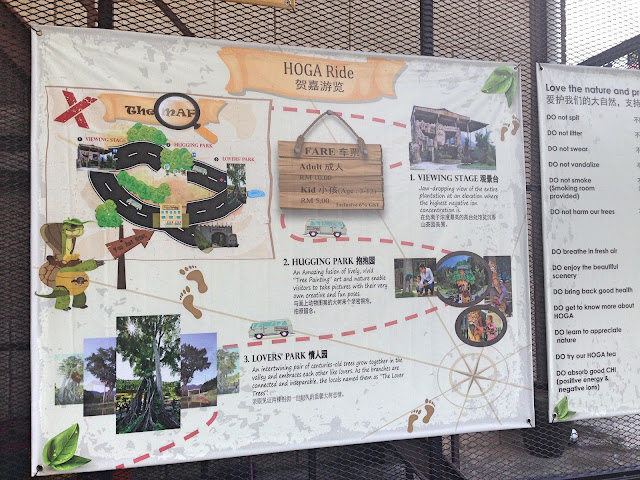 The HOGA van tour ride will take you to three spots. First stop was the viewing stage, followed by the Hugging Park and lastly the Lovers Park. Along the way, your van driver who is also your guide will tell you about the plantation and its precious trees.

Did you know that agarwood tree can only 'grow' if they got 'hurt'?

If a tree didn't get damaged, it will grow to be a normal tree. To produce the black resin thingy, it will have to be wounded naturally or artificially(?) and get fungal infection.

That's just some of the things I learnt during the tour. Cringe. 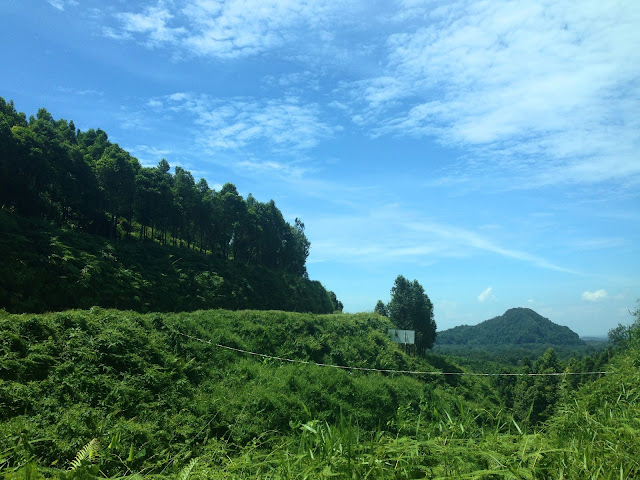 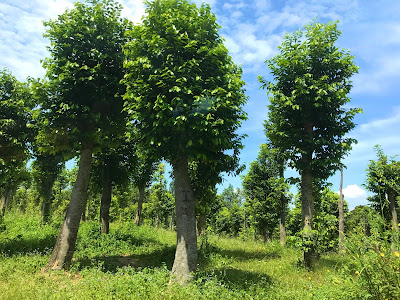 Our first stop after the driver/guide introduced us to the plantation and agarwood trees, was this building. He said it is still in "construction" and is meant to house a restaurant. He dropped us and told us that we can take any van to get to the next stop once we're done here.

On the ground level, there were many plastic chairs placed in front of a screen showing video presentation. The toilets are on this level in case you need to go :) 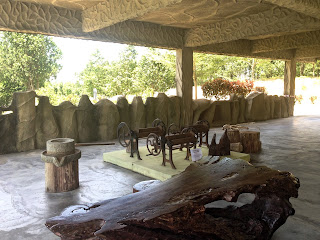 Most people headed straight to the first floor where they could take photos with some 3D drawing. You know, one of those trick eye paintings. 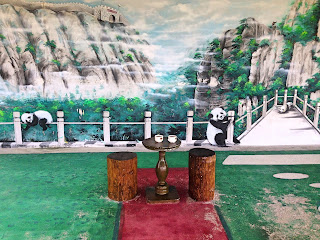 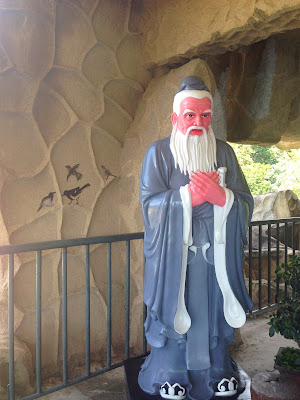 I was more interested in the gorgeous view. There was a swiftlet nest building in the area and I could hear their song. View of green trees and swiftlet song soundtrack... it was just peaceful and tranquillising. 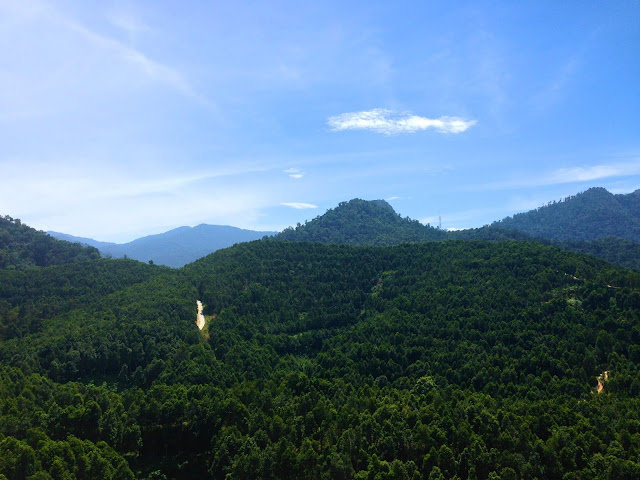 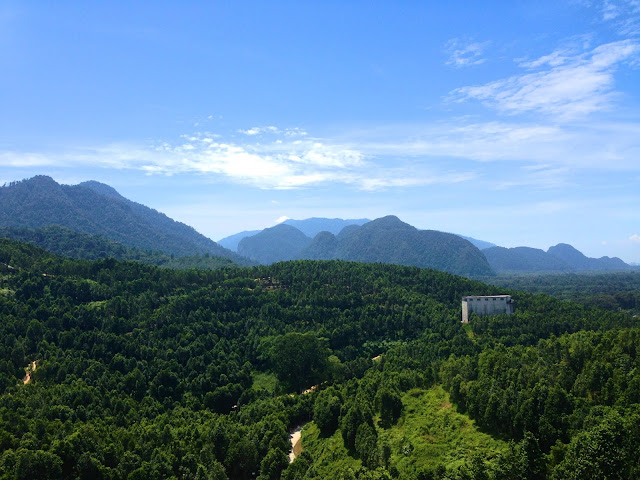 We took the same van to our next stop, the Hugging Park.

The name is suggestive no? Only instead of your loved ones, you hug trees. It is said that hugging these gaharu trees brings good luck. Who doesn't need some good luck, right?

And even if you don't believe in such things as luck, you might still want to hug these trees or at least take photos with them. The trees were painted with cute animals but watch out, some of them might still be wet. 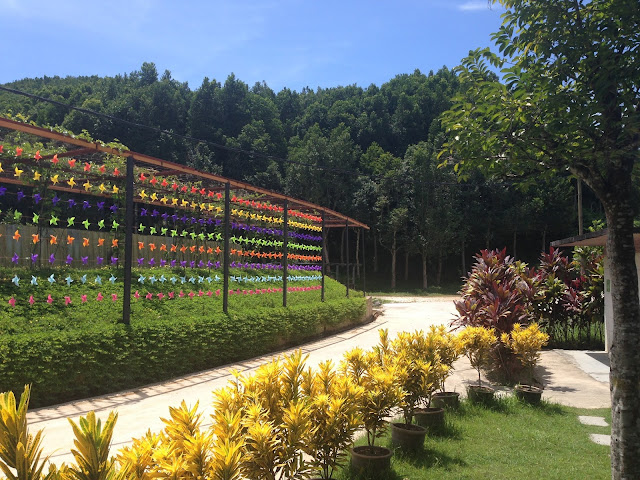 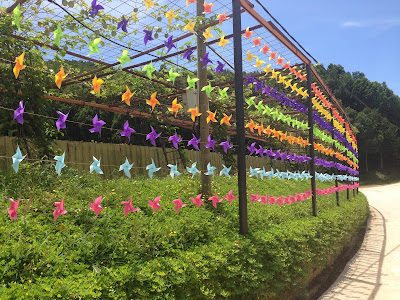 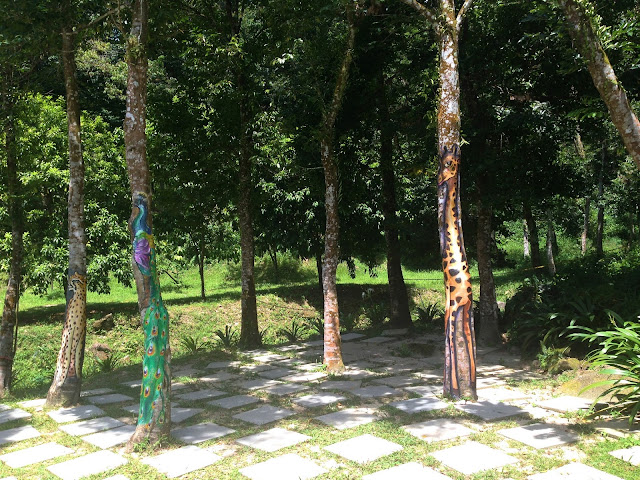 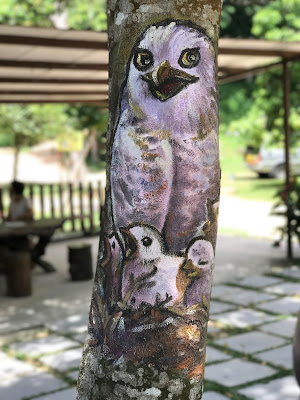 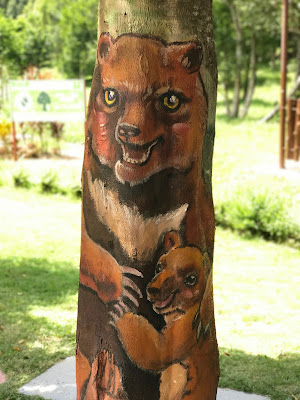 From Hugging Park, the tour continued through more agarwood trees and backtracked by a fish pond opposite the Hugging Park. The audio tour in the van we took said the fish pond helped to control bugs so they won't have to use pesticide in the plantation. 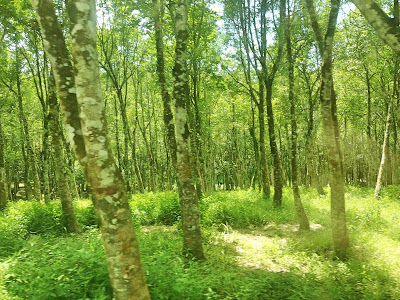 Last stop, the Lovers Park. We stopped at a hut that looks like a bus stop and took the stairs down to the park. The main attraction of this park is a huge tree but for kids, it was the fish pond. Remember to buy fish food at the ticket counter if you plan to feed the fish. 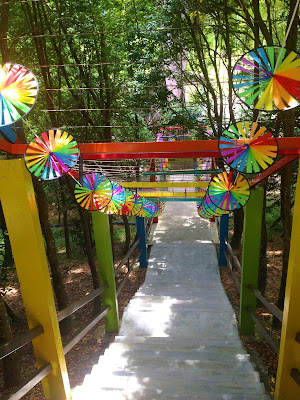 Back to the main building, I headed straight to the HOGA Mart. The souvenir shop sold everything gaharu from essential oil, tea, soup to cookies and even noodles. 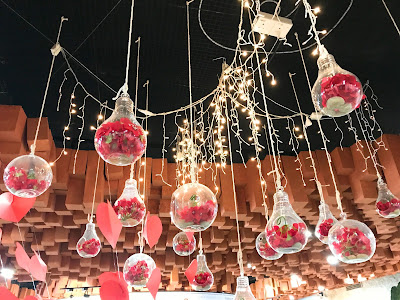 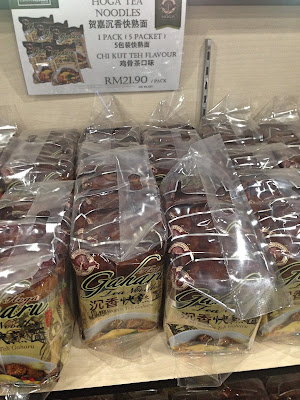 I bought tea sachets and their special tea for myself. For mom, I got a packet of nougat. Not too sweet, I liked the nougat. The price may be on the high side but where else can you get stuff made of gaharu, right? At my request, the cashier dabbed a little gaharu essential oil on my wrist. Not my cup of tea because the smell was too strong but if you're looking for concentrated gaharu oil, you can find it here.

Next, I went to their deli and *finally* got myself...

I won't say you should go out of the way to visit Gaharu Tea Valley but if you're in Gopeng or on the way to Ipoh and you have time to spare, do drop by. The view was more than worth it for me. 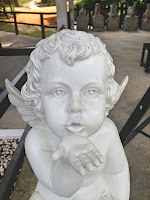 © Shea Sonia™ (@SheaSonia™) and sheasoniashares@blogspot.com, 2014-2020. Unauthorised use and/or duplication of any material including but not limited to pictures and videos without express and written permission from this blog’s author or owner is strictly prohibited. Excerpts and links may be used, provided that full and clear credit is given to Shea Sonia™ and sheasoniashares@blogspot.com with appropriate and specific direction to the original content.

The content of this website is provided for information purposes only. No legal liability or other responsibility is accepted by this blog's author or owner for any errors, omissions, or statements on this site, or any site to which these pages connect.

This blog's author or owner accepts no responsibility for any loss, damage or inconvenience caused as a result of reliance on such information.